IOTAS Ownership of the Stirling Castle

HMS Stirling Castle was a third rate 70-gun ship of the line, built in 1678 at Deptford as part of Samuel Pepys’ regeneration of the English navy, and lost on the Goodwin Sands during the Great Storm of 1703.  It is of high importance as a rare example of a naval vessel employed in key naval campaigns at the turn of the 18th century. 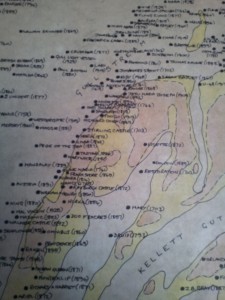 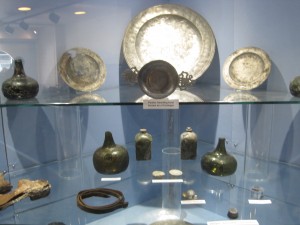 Artefacts Recovered from the Stirling Castle

Diving on the wreck continued until the wreck was once more covered by sand, although from time to time it has again been exposed, allowing further exploration.  A large number of artefacts were recovered from the wreck in the early years of investigation, and were initially on display at Bleak House in Broadstairs, but the majority of these were eventually deposited with the Ramsgate Maritime Museum (RMM) when this was opened in 1984.

Some artefacts remained in Bleak House, but the collection there was broken up in 2006, and the current location of these artefacts is unknown. There are a few artefacts at the Greenwich Maritime Museum, but it is not clear whether these are on display or in store.  Some underwater research was carried out in about 2008 by Wessex Archaeology, and artefacts from this activity are currently held by English Heritage at Fort Cumberland, Portsmouth.

In 2011, IOTAS transferred 184 artefacts which had been held in store by the Trust for Thanet Archaeology to the Shipwreck Museum in Hastings, under a loan agreement which is subject to a review every five years.

A rare ‘Rupertino’ Gun and Carriage were raised from the Stirling Castle wreck site in 2000.  Restoration of the gun and carriage was commissioned by the East Kent Maritime Trust (EKMT),  in 2002, but since the dissolution of the EKMT in 2009,  the gun has never been returned to Thanet, although it has been conserved, and is currently still at the premises of the Mary Rose Archaeological Trust, where most of the work was carried out.

Diving on the Wreck Site

Robert Peacock of the Seadive Organisation is officially licensed to dive on the Protected Wreck site, but it appears that little has been recovered in recent years, and information has been hard to come by.  Remarkably, a film about the Stirling Castle was made in 2003 for Channel 4 television in the series ‘Wreck Detectives’ without IOTAS being consulted in any way!

The Future of the Stirling Castle Archive

As some of you may know, English Heritage (EH) have been carrying out a project on the Stirling Castle for many years. After a period of silence since 2009, last year EH made contact with IOTAS in order to facilitate the loan of a number of artefacts from both the museums, and also the pottery sherds stored at Crampton, for study, sampling and some conservation work, as part of the project. The artefacts loaned are due for return to the museums where they have been on display, in time for the summer season this year.

IOTAS are keen to ensure that artefacts remain accessible to the public in the Ramsgate Maritime and Hasting Shipwreck Museum.  IOTAS has a responsibility to the community of Thanet which sustains our Society, and which has been involved in the recovery and display of the Stirling Castle artefacts, to ensure that these are not lost to local people.

For further information follow this link to the Historic England listing of the Stirling Castle:   https://historicengland.org.uk/listing/the-list/list-entry/1000056

And to see the Historic England blog about the Stirling Castle including 3D images of the leather hats recovered: